How The Loupe provided PR support for a charity organization

When working at a campaign, we often supply clients with PR support at no extra cost. Our team identifies target verticals and key areas of expertise, plans newsworthy events, writes press releases and give clear guidelines how and when to send them to the relevant media. A well-thought-out PR campaign allows slipping past any defenses, as it reaches your audience through channels they already know and trust. In this case study, we will show you how it works in the wild.

Increasingly more people in Luxembourg cannot afford warm meals. In 2017, Stemm vun der Strooss served almost 37% more meals for the people in need than in the previous year. And, despite high average income in Luxembourg, the demand is constantly rising.

This problem becomes most acute in winter, which is the hardest time for those living on the street. Therefore, Stemm vun der Strooss has always tried to raise public awareness of the homeless issues with the onset of winter. The organization brought on The Loupe in January 2018 to tackle the challenge by bringing the hidden to light through an integrated PR campaign.

Having a rich experience of cooperation with Stemm vun der Strooss, we decided to use proven tactics of a local fundraising strategy. The Loupe has been working at Stemm’s winter campaign every year since 2016. Each one was based on a charity poster used for both print and outdoor advertising.

2018 campaign was no exception. As it aimed at drawing attention to lack of basic nutrition in a country that worships prosperity, we had created a poster “Plat du Jour” (Today’s Special) in order to emphasize the contrast between hunger and food luxury. It depicts an empty plate served with a photo of a mouth-watering dish torn from a glossy magazine.

In addition, The Loupe wrote a press release, covering the urgent need for donations, and developed a list of local media, which might be interested in spreading the message. After the press release had been sent to each medium, we started monitoring PR coverage. 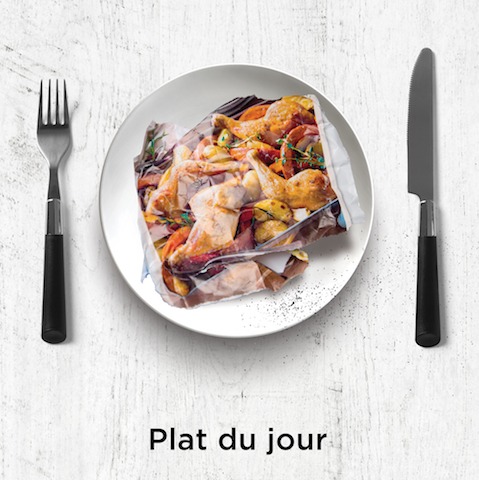 Within the first two months of working together, The Loupe secured 7 media coverage opportunities in several key organs of public opinion that align with Stemm’s target verticals. These included a number of articles and interviews with Alexandra Oxacelay, director of Stemm vun der Strooss.

The campaign was mentioned in four publications:

The press release evoked interest to the organization, which had led to a series of interviews with the director of Stemm vun der Strooss.

RTL.lu, Luxembourg's N1 News, Information and Entertainment Portal, asked Alexandra Oxacelay to comment on the problems of homeless people. The audio interview touches upon the concept of 2018 winter campaign and its potential results.

Maurice Fick of Luxembourger Wort focused on the root and nature of poverty in Luxembourg. The interviewer asked Alexandra Oxacelay to dive into psychology of derelicts who roam the streets of the city in order to trace the evolution of penury.

The interview for Deutschlandfunk covered the peculiarities of Luxembourg labor market. Alexandra Oxacelay explained why work does not protect against poverty and enlightened Tonia Koch on what makes people stay unemployed.

So, if you want to get strong, efficient and circumspective PR support, consider contacting The Loupe. We are always open for new challenges.

Business case
made by the Loupe