How our contribution helped a non-profit organization to triple its donations.

Stemm vun der Strooss is a non-profit organisation in Luxembourg that cares for the homeless and people in need. To be able to help them Stemm vun der Strooss runs various services, including: providing warm meals, laundry services, bathing facilities and so on. In Autumn 2015, Stemm vun der Strooss faced a serious problem: the number of people who asked for warm meals increased significantly. The capacity of the canteen had been exhausted. There was an urgent need to increase the amount of donations. At this point The Loupe came up with an initiative to help Stemm vun der Strooss in raising awareness of the problems the homeless and people in need faced, with the help of graphic design - by creating a poster focusing on the approaching cold winter. In the non-profit’s 20 years of operation they had never before used the oncoming winter (and therefore the beginning of harder times for homeless) as an occasion to appeal for donations.

The Poster, graphic design and its Multilingual Problem

As The Loupe came to the realisation of the poster, the following question arose - how to make the poster understandable to as many people as possible in a multilingual country, such as Luxembourg. One of the variants could have been a translation into three languages minimum. However, instead we choose a different strategy for our graphic design: to use concepts that people conventionally acquire prior to language acquisition. From applied linguistics we know that there are things common to all people irrespective of their origin, because they are learned before language acquisition.

So we built our poster on the interplay of a few concepts: cold versus warm, appeal for help, and body metaphor. To be able to do this we searched for an image that would combine these concepts. We found it; a beautiful picture of a professional photographer from Spain, Malia León. In line with our multilingual strategy, we used as few and as simple words as possible. As Stemm vun der Strooss’ communication language is French, the slogan, “I am outside. On which side are you?” was written in French. To strengthen the message we wanted to send across, a small trick was used: the last word in the phrase “I am outside” is written mirrored. 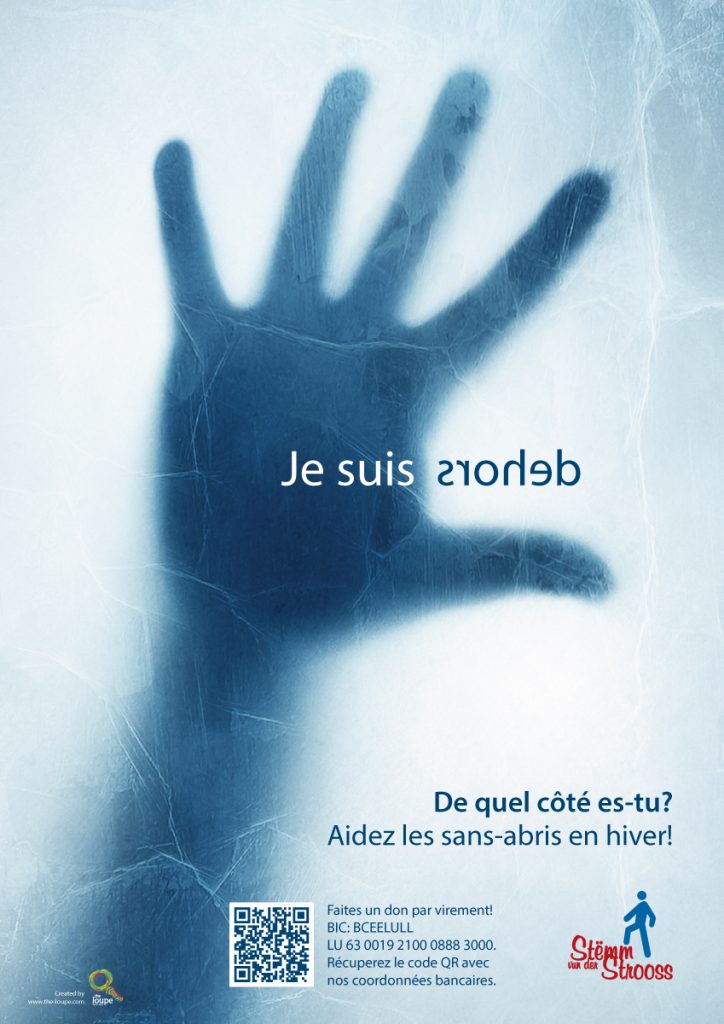 We tested the poster within different groups of people who have French as their second, third and fourth language. Seeing as the text slogan has a double meaning we wanted to be sure that people would not be confused. The feedback was in line with our expected impact.

To support the release of the poster we issued a press release that helped to inform about the poster through the media. It said: "The poster, ‘Je suis dehors’, wants to raise public awareness and prompt consideration of what it means to have to stay out in the cold. ‘Today you are a successful person and tomorrow you end up on the street. Nobody is insured. But that is exactly why the help of a fellow human is so important.’ This is the message of the poster." The action produced positive results. Along with other measures, it helped to increase the amount of donations received by Stemm vun der Strooss by more than three times compared to the previous year’s donations. Interested in stunning and remarkable poster for your business/organization? Our design team is here to help!
Business case
case
graphic design
graphic design Luxembourg
intercultural communication
Luxembourg
made by the Loupe
multilingual
multilingual graphic design